To use the chart:

1. Find the relationship to the common ancestor for the first person going across the chart.

2. Find the relationship to the common ancestor for the second person going down the chart.

3. Look where the column intersects with the row for the relationship between the two persons. 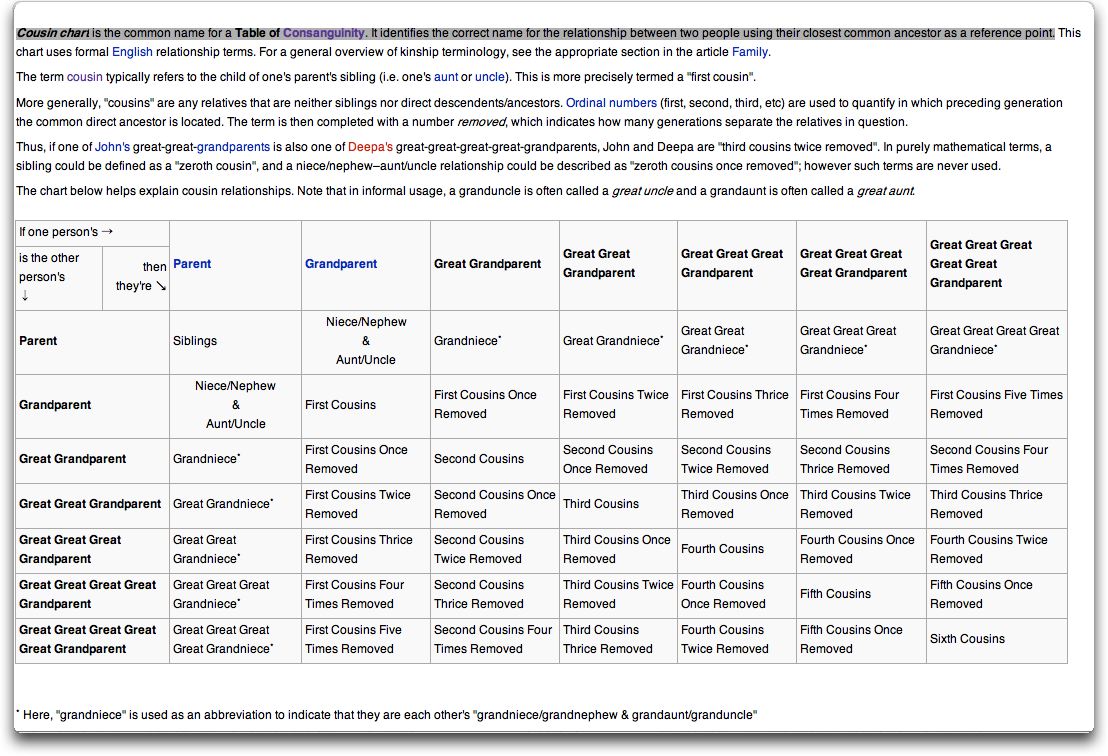 Consanguinity is the quality of being descended from the same ancestor
as another person. (ie. Abraham Blumin & his 2 wives, the sisters Shane
Freda Goldstein and her younger sister, Sylvia Goldstein).

The relationship between any two persons is calculated based on a common
ancestor. It is possible that there may be several common ancestors, and
for a given ancestor several connecting branches of different lengths.
GeneWeb informs you who these ancestors are, and how many branches there
are between the people. It lets you know what this relationship is :
whether a brother, a sister, a great-aunt, or an ancestor who might be
15 generations distant, etc.

The connotations of degree of consanguinity varies by context (e.g.,
canon law, Roman law, et al.). Most cultures define a degree of
consanguinity below which sexual interrelationships are regarded as
incestuous. In the Catholic Church, unwittingly marrying a
closely-consanguinious blood relative is grounds for an annulment.

Historically, some European nobles cited a close degree of
consanguinuity when they required convenient grounds for divorce,
especially in contexts where religious doctrine forbade the voluntary
dissolution of a failed marriage. Conversely, the consanguinity law of
succession requires the next monarch to be of the same blood of the
previous one; allowing, for example, illegitimate children to inherit.

The word consanguinity is voiced in the United States Declaration of
Independence.

"We have reminded them of the circumstances of our emigration and
settlement here. We have appealed to their native justice and magnimity,
and we have conjured them by the ties of our common kindred to disavow
these usurpations, which, would inevitably interrupt our connections and
correspondence. They too have been deaf to the voice of justice, and of
consanguinity. We must, therefor, acquiesce in the necessity, which
denounces our separation, and hold them, as we hold the rest of mankind,
Enemies in War, in Peace Friends."

Consanguinity and Relationship. The genom of an individual consists of a
great number of genes which, if mutations are ignored, reproduce
identically. The genes can be used to measure the identity of a person.

The genes are placed in precise locations named "locus". Each individual
has for each locus two genes, one transmitted by his mother, the other
by his father, and transmits to his children a copy of the one of his
genes.

The Consanguinity of an individual x is the probability cg(x) to find in
a given locus two identical genes.

The Relationship of two individuals x and y is the probability pr(x, y)
to find in the same locus two identical genes.

GeneWeb displays the consanguinity and the relationship in the form of a
percentage.

Statistically, on the great number of locuses of an individual, the
consanguinity corresponds approximately to the percentage of his locuses
holding identical genes.

A test could tell if you possibly had Jewish ancestry including the
Cohanim DNA markers.

Your ancestors left clues in your DNA that can determine your deep
ancestral origins. By comparing your results to databases - the largest
of its kind in the world - clues indicate a possible Jewish ancestry.
Our Jewish specific comparative databases are the largest in the world
containg records for Jews of Ashkenazi and Sephardic origins, as well as
Levite and Cohanim.

mtDNA: By testing the mtDNA, males and females can determine the origin
of their maternal line.

Almost half of Europe's Jews are descended from just four women who
lived 1,000 years ago, a study says. Scientists studied the
mitochondrial DNA - passed from mother to daughter - of 11,00 women of
Ashkenazi Jewish origin living in 67 countries.

The four women are thought to have lived in the Middle East about 1,000
years ago but they may not have lived anywhere near each other,
according to the study published in the American Journal of Human
Genetics.

However, they bequeathed genetic signatures to their descendents, which
do not appear in non-Jews and are rare in Jews not of Ashkenazi origin.

The Ashkenazis are thought to have travelled from the Middle East to
Italy in the first or second Centuries. The Ashkenazis moved from the
Mid-East to Italy and then to Eastern Europe, where their population
exploded in the 13th Century, the scientists say. In Central and Eastern
Europe, many spoke Yiddish - a form of German, mixed with Hebrew.

Ashkenazi comes from an old Hebrew word for Germany.

By the outbreak of World War II, there were some nine million, some
two-thirds of whom were killed by the Nazis.

There are now some eight million people of Ashkenazi origin living
around the world, the researchers say.

Recently published research in the field of molecular genetics – the
study of DNA sequences – indicates that Jewish populations of the
various Diaspora communities have retained their genetic identity
throughout the exile. Despite large geographic distances between the
communities and the passage of thousands of years, far removed Jewish
communities share a similar genetic profile. This research confirms the
common ancestry and common geographical origin of world Jewry. Jewish
men from communities which developed in the Near East – Iran / Iraq,
Kurds, Yemenites, Roman Jews, and Ashkenazim / European Jews – have very
similar, almost identical genetic profiles. "Despite their long-term
residence in different countries and isolation from one another, most
Jewish populations were not significantly different from one another at
the genetic level. The results support the hypothesis that the paternal
gene pools of Jewish communities from Europe, North Africa and the
Middle East descended from a common Middle Eastern ancestral population,
and suggest that most Jewish communities have remained relatively
isolated from neighboring non-Jewish communities during and after the
Diaspora."